Day one, and Berlin has our hearts and minds tied up in the boot of it's beemer. 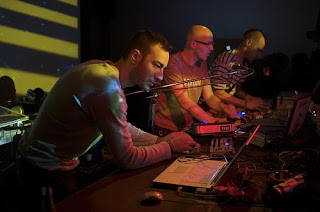 Dr Nojoke on stage with TRIoon, one of the acts on the insanely packed Netaudio Berlin lineup.
The good doctor had a few of the early arrivals up to his pad for some beers and some banter last night, and we soon became friends. An unassuming man, he lives in a beautiful ex-squat in the middle of Berlin's activist neighbourhood, a beacon of laid back cool among a city full of the same.

We'll be coming back with some of his music, so keep your ears peeled.