I went to a great event here on Sunday evening - the Manchester premiere of a new documentary on the American composer/inventor Raymond Scott, directed by his son Stan Warnow. On the bill, along with the film itself, were special Scott-themed live sets by local acts Demdike Stare, Illum Sphere v Kidkanevil and the one-off supergroup The Manhattan Research Transfer Project. 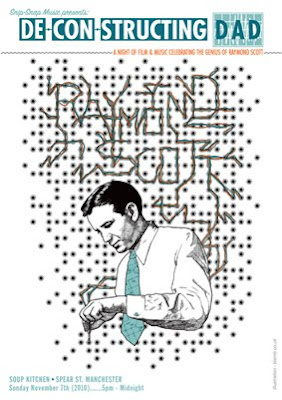 Raymond Scott held down many different jobs during his long and varied career. In the 1930s his Quintette made a series of popular jazz recordings that led to them appearing in some major motion pictures. The best known of these is "Powerhouse", which in the 1940s was used by Warner Bros to soundtrack some of the most popular and best loved Looney Tunes cartoons.

In the 1950s Scott was the orchestra leader on the hit television show "Your Hit Parade". He used the money he earned from the show to fund his growing obsession with electronic music, and focused on building what would essentially become synthesizers as we know them. A pioneering visionary, Scott was the man who invented the concept and execution of sequencing, without which most modern music would not exist. His own electronic compostions of the time, used mostly as sound beds for adverts, are hauntingly beautiful, and still sound fresh.

Each of the acts that performed either directly acknowledged Scott's music, or came from a similarly out-there electronic background. First up were Demdike Stare, of the Pendel Coven/Modern Love family, who delivered an intense and hypnotic set of white noise infused ambience, backed up by some excellent cult movie visuals.

Next was a collaborative set by local beat-freakers Illum Sphere and Kidkanevil (from the Hoya Hoya club night), which tended to the more boom-bap side of things, yet managed to incorporate lots of samples and references to Raymond Scott's music. Again, there were excellent visuals on display, this time by artist EMN.

The final live act, and the highlight, was the Manhattan Research Transfer Project (named in part after Scott's own electronic "orchestra" of the 50s & 60s). A supergroup composed of 808 State's Graham Massey, Silverclub's Henrietta Smith-Rolla, and Dennis Jones, they played a set of Raymond Scott compositions on fully analogue synthesisers (so analogue that some didn't do as they were told). It's a rare treat to see such a full-on synth set-up in action live these days, and the sounds were phenomenal. Unfortunately no recordings of this gig exist (though there is talk of possibly some studio recordings in the future) but here is what it looked like:

After a short intermission we were back in to see the film "Deconstructing Dad", directed by Stan Warnow, who was also in attendance to introduce the film and field questions afterwards. It's an excellent documentary on a fascinating subject (featuring contributions from Mark Mothersbaugh of Devo and DJ Spooky, among others, and of course with an awesome soundtrack), and it deserves to get some wider distribution. The film is available to buy on DVD, and there is more information on Raymond Scott and Stan Warnow at http://scottdoc.com/. Watch the trailer for a glimpse into the life of this extraordinary man:

And if you are interested in hearing more of Scott's music, check out "Manhattan Research Inc", a 60-odd track compilation which is available to listen and buy from Boomkat.
at 1:24 pm