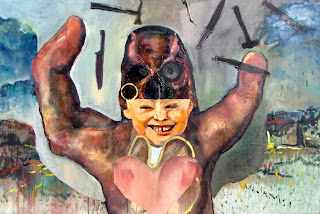 'Love Without Brains' is Larry & Darren's baby, & is about what the title suggests & about the breakdown of a beautiful relationship when you have to end up living in an old goats shed round the back of an in-bred's pub in a tory Roman walled cathedral city better called Chic Hysteria, walking to the poop a scoop at Jubilee park at 5 in the mourning, because the bigots won't let you use their bogs, with a huge bag of your own shit & no canine friend to disguise the abomination, then crawling back to the slug infested shit whole for a cry & an angry wank. Because of her. Come on girls, get wet!