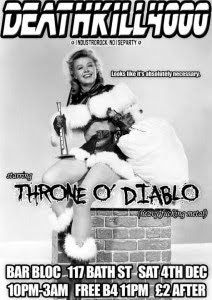 DeathKill4000 - it's a club night. And also some kind of weird religion. We hear they worship noise and have a third sex deity. Primarily active in the Glasgow underground in the middle of the last decade, DK4K has recently returned from beyond the grave to the new venue of Bloc. New for them that is - Bloc is old. We asked them to do us a mix, and resident Dirty Marc (aka Monty Funk - he means to have you boy) was only too happy to oblige. Here it is in all its noisy/post-dubstep/glitchy/slightly-rocky glory:

And as a special Brucey bonus I managed to corner Marc to do us a wee interview, 9 questions in total:

Where did the name come from?
My fellow selector FiFi Chops and our good friend, guitar ace Gunthor Manhunter were discussing humorous names for a fictitious metal band back in 2003. The best one seemed to fit the idea for a night we were planning to start and so we stole it.

What was the inspiration for the club?
I'd been DJing at some gigs put on by the other DK-founder, Clitoris Party, and we thought it'd be good to try a club night. We wanted to put on something that always had an uncompromising live act and with a music policy that reflected the breadth of our tastes in rock and electronic noise. We needed a good name though, and FiFi not only provided one, she also came on board to add to the musical breadth with her own extreme tastes. At that time, there was really nothing else like it in Glasgow.

What one tune will always ignite the DK4K floor?
Slayer - Angel of Death is always a winner, you can't really argue with Slayer!

What is the best band you have ever put on?
That's a tough one. A couple that stick out for me are The Bronx's 1st ever UK headline show at DeathKill at the Barfly - total punk mayhem. Lesbians On Ecstasy blew everyone away and on a personal note, I always had a blast with Vancouver electro-shock-rappers Stinkmitt (and they put on a hell of a show). [I can confirm that as I was there - it was aweosme!]

Charles Manson or Ted Bundy?
I'll let FiFi take this one, she's the serial killer expert.
"Manson. He MADE OTHER PEOPLE KILL, that's power right there."

During the DK4K hiatus, what clubs would you frequent?
Mainly, anywhere that would let me DJ, but I did sometimes go other places... The Sub Club is hands down my favourite place to frequent, and to DJ at - in Glasgow at least.

Ideally, how would you like to die?
Ideally, I wouldn't - but when I do I'd like my remains to be shot into space - let the infinity of the Universe make some eventual sense of me.
at 1:35 pm