Shunda K is one half of the awesome Yo! Majesty, who have been making some serious waves the last couple of years with their outspoken, openly gay, dancefloor-dominating hip-hop. This week sees the release of "I'm Da Best", the second single to be taken from Shunda's upcoming solo album, due out in January next year. I was asked to interview Shunda for the Lock Up Your Daughters fanzine (it appears in issue 5 which has just been released and is highly recommended), and they've let me reprint it here for all you Shallow Ravers. Dat's Wassup! 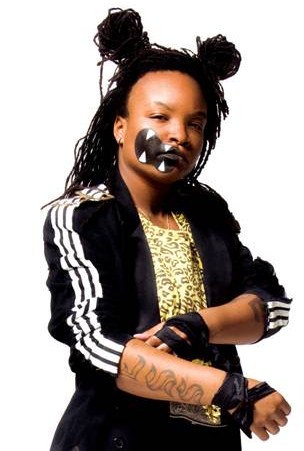 Where are you right now and how is it?

I live in Brandon, FL and the weather has been pretty wishy washy, sunshine in between the rain.

When is your album coming out?

The album features over 11 collaborations with artist from all over the world including my wifey Ms. Tedra, Lady Lash, Tanisjah Matthews, SNAX, WeHaveLove, Raspberry Cocaine, B Coney (my lil cuz), The Real Fiasco & Flyy Git (a couple of my artists), and, of course, Cindy Wonderful of Scream Club and Shon B of Yo! Majesty.

With this album comes knowledge and wisdom about life, from the church to the club and everything else in between. It is a record that will encourage and inspire, raise questions and debates, and explain to the world who I be: The Most Wanted, The Best To Eva Came Grande Dame, Shunda K!

Who's producing on that?

When are you next coming to Europe?

Ill be back over to the UK headlining London's Lady Fest 2010 November 12th, so make sure to come out and witness nothing but the truth!

What are your main musical influences?

My life is my influence, the things I witness and go through and a daily basis. I have a lot to talk about.

Yo Majesty had such a distinct sound and vibe it makes me wonder what the music scene like in Tampa? Is it different from other parts of the States?

The music scene here is like the music scenes every where else. I've always stayed within my realm, doing me because being gay and bragging and boasting about it really didn't go over well in the late 90's early 2000's (as I started writing in '97). It's been a pretty lonely road I must say.

How did Yo Majesty come together?

After meeting Shon and feeling what she brung to the table, we agreed that Yo! Majesty should be the group name.

And if you don't mind me asking, how did it come to an end?

I walked away because everybody deserves respect and I wasn't getting that, even though I was the one carrying everything in many cases. And so moving right along, if I cant do what I love with others and be happy doing it, it's not worth doing it with 'em. So, Im keepin it movin!!!

At a time when the gay rights movement is having big clashes with the religious right in the US, it's very fresh and surprising to hear an openly gay AND religious performer. Do you have any trouble squaring off those two sides to your persona?

God is love and with that knowledge, I move forward with my head held high. The word of God says, to "study to show yourselves approved." It doesn't say that to encourage us jus to study for the book smarts alone, but we need to study the word of God so we can get an understanding of how God deals with His people, where we can apply these same principles to our lives. The word also says that "whoever believes and confesses the name of Jesus Christ will be saved." God says that everything He made is good and very good, so its all good.

My mission is to spread the truth about who God is and what His purpose is for us all. And so, because another human tells me that I'm not worthy to do that, I'm suppose to stop? Hell naw, the devil is a liar. I have peace with my maker and that's what we all need to be doing, making peace with Jesus so we can live our lives in the fullness and be happy. God loves each and everyone of us, so don't you let nobody else tell you He doesn't. Stop em right in their tracks.

Get to know the Lord for yourself and stop relying on pastor and this one and that one to lay hands on you to be healed. Believe and lay hands on yourselves. Pray for yourselves. Get up out of that pit you in. All excuses was nailed to the cross, so I cant use the excuse, because people don't agree with my life style, I can't be what I want to be. I'm free to do me, through the grace and mercy of God. We all are!!!

How is the whole Homo-Hop scene going over there?

I can only answer for myself and as far as I'm concerned, I'm doing dis!

Any fresh young talent you'd like to give shout outs to?

Stay tuned for some new artist coming up out of the GMEQCA camp. That's my label which is an acronym that stand for God's & Man's Eternal Quest to Conquer All. They include Blaque Pop, Fly Gitt, The Real Fiasco, and Ghetto C.

"I'm Da Best" is out now. You can buy it on iTunes, and you can hear it right now:

And as an extra bonus, here's two remixes of "I'm Da Best" by me, The Niallist. Peace!