Tim Minchin on the Pope

The views expressed may or may not precisely match those of all contributors to Shallow Rave. Personally, I reckon you fuck kids and you can go fuck yourself, and helping people fuck kids? Let's help you go fuck yourself. Rapists in funny hats are still rapists, no matter who their invisible friends are or what books they like to read.

If you are unaware of why folk like Tim think Pope Palpatine deserves the assisted autoerotic, read on: 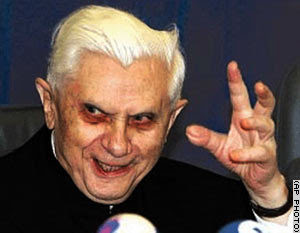 If you are still unconvinced, google it.
To be fair, being a twisted fuck might come with the job... JP2 rewarded Bernard Law with a groovy new job in Rome for his part in covering up the church's Boston-based child rape. His new job "will give him considerable autonomy", about the last thing a self-important accessory to molestation needs.