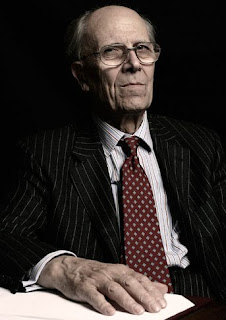 With the Labour-led Hackney Council are acting like a cliche of an out of touch political dinosaur trying to ruin one of the best musical venues in the UK, the Tories clearly felt a need to show them how a pro loathes joy.

Tomb-faced Tebbit - never content with the mere fading memory of his prior efforts towards a more miserable Britain as Thatcher's right-hand knife - has piped up a few times since his retirement. He popped up in the 90s to criticise giving aid to Africa, for example, and he was once moved to write a letter to the Daily Telegraph suggesting that no homosexual should be allowed to run the Home Office, or in fact any cabinet job. Apparently he worries about gays in a position "to do each other favours".
Sure, that all sounds evil (and ever so slightly homoerotic), but is it really evil? Is it bona fide, 100% Tory grade evil?

Being an ambitious sort of a man, The Chingford Skinhead decided to up his game, and kick a child.
at 12:36 pm