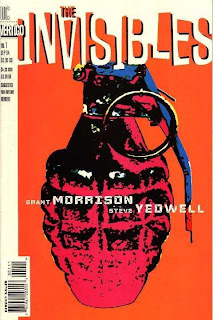 I love rediscovering things far too late - I recently found the first The Invisibles trade paperback at a friends, and finally re-read the series in it's entirety. It still has the same thought-searing, adrenaline-powered intensity as the first time I encountered it... Warren Ellis (often seen as a diet Grant Morrison), talks in Desolation Jones of Phillip K Dick's enlightenment encounter as "information-rich pink laser from orbit." That's sometimes how The Invisibles feels, though it's more for setting you towards digging deeper into other philosophies, and opening doors.

Is it a 5-dimensional antibiotic? a condensed hypersigil intended to trigger a shift in the mass collective subconscious? a powerful magical tool for expanding minds? Perhaps. I simply love the intricate literary construction, the ideas it introduced me to and the sheer Fuck-You sharpness of the narrative and dialogue.

So yeah, frantic message, beamed through time from the nineties steals sleep from Glasgow resident. Not the snappiest headline ever, but I'm still buzzing from it. I recommend the entire Monolake discography as a soundtrack.

On the comics tip, Warren Ellis has finally completed Planetary. Between issues 26 and 27, both he and Artist John Cassady have completed runs on New X-Men. It's been too long. Previews are out.