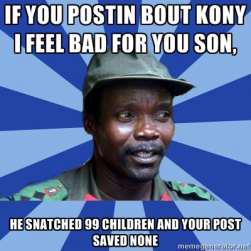 If you have been on a social network at all the last few days, you cannot have missed the virally potent KONY2012 campaign.

Buoyed up by the notion that clicking can save lives, millions of armchair activists have thrown their support behind a campaign that, to be totally blunt, they have NO FUCKING IDEA about. Still, not everyone can know about everything, right? So hey! Lets share intel, and spread some basic information that seems missing from the Invisible Children video.

As Taz Buckfaster puts it to his social network:

"Pro-tip for all you KONY 2012 bandwagon-jumpers... Africa is a continent made up of 55 countries. Have a fucking clue about the place before supporting a charity that is suggesting we drop US troops in a region in which Kony's not even operated since 2006, all the while spending a metric fuckton of your donations on lavish expenses, flashy (and disingenuous) film-making, supporting an army notorious for rape as a weapon of war, and pushing for boots-on-ground Western intervention in an area which is going through a difficult and oft-faltering peace process.

You people make me sick. If you want to feel good about yourself, do some real good in the world. Clicks and shares don't mean shit."

People disagree about the number of countries (depends on your definition of country), but Taz's point is pretty spot on, and sums up what a lot of people have been thinking.