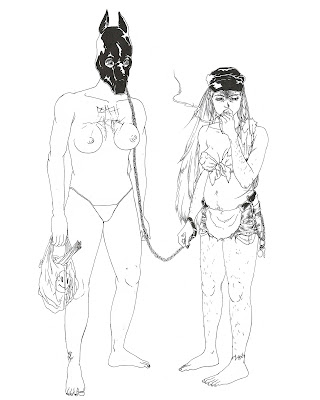 Texture, one of Shallow Rave's erstwhile hip-hop afficionados, got the chance to listen to a stream of the new album (and major-label debut) of Death Grips the other day, courtesy of the lovely chaps at The Skinny.

While we're duty bound not to share anything about the album with you that isn't already public, we can say that 'The Money Store' is a breathtaking, intense, apocalyptic tour-de-force. The Quietus has a very good track-by-track analysis of the album, and we have to wholeheartedly agree with their assesment, that it sounds like: "2-Live Crew meets Tetsuo 2: Bodyhammer."

With upfront, down-low, synth-led productions, the punishing drums of Zach Hill, and MC Ride in fine, furious flow, we predict this will be one of (if not THE) best albums of 2012. And they have another one dropping later in the year. We're super hyped.

Below you'll see the four tracks Death Grips have already made public. Jaunt on over to Third Worlds to grab the mp3s of these badboys, and whet your appetite for 'The Money Store.'