Atari Teenage Riot - Is This Hyperreal? 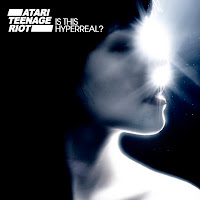 Atari Teenage Riot's new studio album, their first in 10 years, is vicious, nasty music for angry people, full of jackhammer beats, overdriven noise and screamy, riot-inducing vocals - it's absolutely awesome. Opening with the two recent singles Activate and Blood in my Eyes, ATR launch into gloriously mental, breakbeat-driven hardcore, full of hooky sloganeering and raucous gang-vocals, the latter drawing the powerful vocals of Nic Endo to the forefront. Drawing on subject matter as diverse as political activism, sex traffic, freedom of information and plastic surgery, ATR cut through the malaise and apathy of the consumer culture like a chainsaw through a mattress. There's more of the same in Codebreaker and Rearrange Your Synapses; three-chord, high speed machine music that rips up everthing in its path with cheerful abandon. However, as fun and effective as the breakbeat madness is, it's limited in its scope and can grow a little repetitive - title track Is This Hyperreal? is one of the album's stand-out numbers, working a series of vocal chants over a beatless 303 bassline that continually threatens to erupt and comes across like some early Scorn or Head of David number. With hints of (Pandemonium-era) Killing Joke's brooding paranoia, Nic Endo, Alec Empire and Cx Kidtronix take turns at inciting the listener to action and rebellion, and the rare sense of restraint actually delivers a far more powerful message than bellowing along at 180bpm.

One of ATR's central concepts has always been a fascination with machinery and the evolution of digital technology, both lyrically and technically; there's a nice homage to the retrograde Atari sound in Collapse of History, which begins with the classic pong sounds building up a beat. As well as being one of ATR's most interesting aspects, it's also a limitation at times, and Empire rarely lets vocals pass through the mix untreated - everything has to have delay, distortion and reverb, which can become frustrating and make tracks feel overworked towards the latter half of the album. Overall, Is This Hyperreal? is a brilliant slice of digital hardcore that sits neatly alongside ATR's other works, and hopefully, is a springboard for a triumphant return. Considering the tour dates lined up (wot, no Glasgow show?) it seems a fairly sure shot.