This seems pretty fucking crazy - the Hetherington building's occupation has come to a fairly abrupt end following police intervention this afternoon. The Hetherington has been occupied for the past two months as part of an ongoing protest against the cuts to student funding and the hike in tuition fees. I've been right next to the university all day and there's been helicopters circling, hi-vis everywhere and a seriously heavy handed turfing-out of the remaining students in the building. The university's line is that the protest is interfering with their plans for refurbing the building and making it an academic resource. Considering that in my time at uni, Muir Russell kicked a number of departments out of the main building and into shitty pre-fab premises so that he could cram as many paying functions into the main building at as high a price as possible, I'm not exactly excited to see the uni reclaiming it's property.

On the other hand, a few contacts tell me that previous student protests, including the recent demonstration in the quadrangle, have gone a bit far in the aggression stakes, breaking into offices and going all-out to embarrass the administration. The worst excesses being attempts to occupy the principal's office that have achieved little except making the protesters look like a gang of hooligans. However, what I've seen today seems utterly excessive, and is best described as a load of ludicrous showboating on behalf of an institution thats rapidly losing their shit.

I have no camera with me, so these photos from the BBC's rolling news coverage will have to suffice. 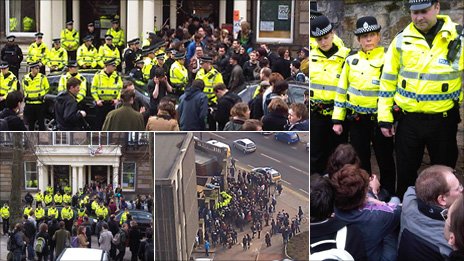