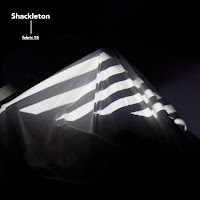 After conquering the bass music scene and sending the critics mental over his Skull Disco and Woe to the Septic Heart labels, Shackleton's latest offering is, surprisingly, a mix for Fabric. The dichotomy between the big room superclub on the one hand, and the darkly minimalist, mesmeric producer on the other aside, this is still a bloody weird choice. Rather than picking and choosing from other contemporaries and presenting a detailed mix of modern music, Shackleton uses only his own tracks, and most of those are reinterpreted uniquely, which rather runs contrary to the concept of a 'mix' as we understand it. That said, this doesn't feel like an exercise in self-promotion (as some have accused Omar S or Ricardo Villalobos' previous Fabric mixes of being), but comes across as a fascinating insight into the mind of a prolific producer. Musically, it's everything you'd expect, dissecting and rearranging past tracks into brooding sub-bass, murky passages of ambience, and his trademark collision of African and Arabic percussion and syncopation. It's an intense trip.

Shackleton has always relied on samples to enhance the atmospheric nature of his music, and opener Come Up stitches together repetitions of "beginning to come up" with shamanic wailing plucked from some future dystopian tribescape, creating a taut balance between rational, medical sounds and the drugged-out labyrinth of the trip. Continuing the lysergic tone, the dense layers of Moon over Joseph's Burial warp and twist around each other, disorientating and fugging the brain, until a barely recognisable Hypno Angel seizes the momentum via a distressed, ominous wailing. It's a disquieting drop-in, and could as easily be a call to prayer, orgasmic cries, or tears of sadness amplified and distorted. Like Lynch's dream-logic, the multiple possibilities place the listener in a state of perpetual uncertainty and disquiet.

The voice of the rational world breaks through again on Negative Thoughts, with a seemingly far-off voice explaining how to exorcise negativity, before the swirling wall of sub-bass and shifting percussion washes the listener away into a new dreamscape. Continuing through Death is not Final, Deadman, and his new singles Man on a String I and II, Shackleton carries the listener through kabbalistic mysticism, future dysopias and scorched nuclear winters, before finally arriving at the potent Massacre as the climax of the disc. With it's readings from the Book of Revelation, sickening sub-bass and frenetic percussive rhythms, it's a fitting climax to a post-modernist epic; the declarations that "I am the first and the last, the alpha and omega" leaving the listener utterly stranded in the wasteland, before Stripped bubbles away in a mess of voices muttering binary code.

This is undoubtedly one of Fabric's most interesting mixes to date, combining an epic narrative with devastating tunes and dark machinations to create the kind of post-modern headfuck rarely found in dance music.