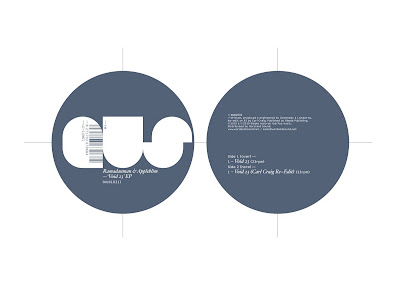 So, it finally lands. Two of UK electronic's big hitters together again after a bona fide smash, with the legendary / untouchable / not as good as he used to be / still magnificent Carl Craig taking on remix duties. It seems like an automatic recipe for success, especially considering the winning streak Ramadanman's been on for the past two years (excepting the lone mule cluttering up the Ramadanman EP).

Despite the fact that both tracks clock in at a meditative 9 minutes, neither the original or the re-edit feels meandering or empty - Ramadanman's rich melodies and taut rhythms combine beautifully with Appleblim's textured darkness and offbeat syncopations. Each strain of bass music is given space to breathe and evolve, and the back-and-forth between makes for a deep and expansive cut. With drowned synths, far-off vocals and funky syncopations, Void 23 worms its way through styles, driven by the pair’s innate sense of songwriting.

But is it any good? Well, its syncopation may prove a little too weird for many techno DJs, and at 126bpm, it’s not exactly fodder for the dubstep crew, but hell, a bit of practice and it’ll go either way. This “neither one nor the other” pervades the track though - certain passages are beautiful head music, whilst one drop-in is just peak-time techno, leaving you further confused about how to deploy it.

Given all the components, Carl Craig restructures the various fragments into (unsurprisingly) a peak time Detroit number, and whilst he has his faults, Craig’s ability to craft a slick narrative is undeniable. The re-edit draws all the glorious synths to fore, pins down the best of the bass, and crafts far more solid dancefloor tune, with big filter sweeps and sweet-sounding hi-hats. He even manages to make space for those weird French spoken word moments that have been cluttering up Ramandanman’s tunes of late.

Ramadanman and Appleblim’s dubstep is a little too spastic, Carl Craig’s techno a little too predictable, but this is an absolutely solid tune, and guaranteed success.