John Rattray Has a Blog 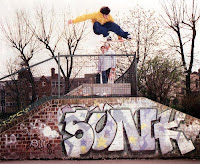 The lads at Focus tell us John Rattray has a blog. I bought my first deck of the chap, a Colin Kennedy ghostbuster deck. John was fucking rad back then... He and Colin Kennedy basically were Scottish skating back then. Then they got even better.

John ended up in the states skating for Zero, Thunder and Osiris, and Colin currently runs Team Nike SB UK. I think it's fair to say they are both still fucking rad motherfuckers.

The picture on the left is from about 2000, around about the last days of disco for my favourite Blueprint lineup, before Zero, and after the Panic/Blueprint team's 'Anthems' video that so badly blew my tiny little mind. Here's to some great days.
at 6:45 am