So..... I have new tunes and have listened to rather a lot of good music in the past week, so figure it's time for a sporadic review blast. Dig in. 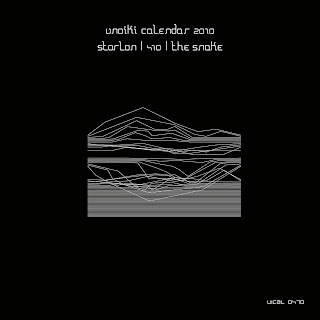 Storlon - The Snake (Unoiki 0410) - free to download until the 14th.
Unoiki's digital calendar continues to be awesome - another month in and another surreal slice of avant-garde music that isn't afraid to find the fun in experimentation. Glitchy crackles, minimal pops and deep swells spray and coalesce as the bass creeps up, before the wall of noise breaks and the beats emerge. Halfway between Martyn's low-end experimentation and clickno minimalism, it's a more DJ friendly track than previous releases, without ever losing sight of the label's experimental and avant garde ethos. Awesome.

Dam Mantle - The Grey EP (Halleluwah Hits)
Originally known as Animals and War, Tom Marshallay made quite an impact on Glasgow's DIY and independent scene, gigging with a looper pedal, casio keyboard, acoustic guitar and drum machine. It was brilliantly lo-fi and psychadelic, but seemed quite limited to the live sphere only. Some unknown metamorphosis has taken place, and Dam Mantle (joined by Louts for live sets) is suddenly a bass-heavy electronic proposition that owes as much to Flying Lotus, Blockhead and Samiyam as it does to the alt-folk origins. Rebong begins as a wobbly piece of electronica, before morphing into a wonky, broken beat rhythm that wouldn't sound out of place on a Lukid or HudMo record, whislt Yoghourt takes vocal loops, splices and chops them, and builds floating ethereality into thump-crack hip-hop. Rebong's probably the most evidently dancefloor track, full of crisp percussion and lfoed basslines. Admittedly Rusko won't be playing it any time soon, but for those looking for more cerebral and wonky dancefloor material, it's a bold piece of work and as a whole work, Grey is excellent.

Akira Kiteshi - Boom N Pow / Ming The Merciless
Finally got round to buying some Akira Kiteshi, after hearing many many good things about him. Finding a Raffertie remix finally flipped the decision and off I go to buy two EPs. For the most part, AK makes that mythical beast known as 'Dubstep'; full of wobbly, skull-crushing bass and skittery, swung beats. However, there's a smattering of offbeat breakcore-isms, and a predilection for frantically screamed vocals that adds an unnerving edge.
Boom and Pow's probably my favourite off both records, with crunked up boom-clap and fractured hype vocals. The best thing about it is the first breakdown though, which cuts up chop socky vocals and white noise, before a dropping the famous "and now for something completely different" and morphing into a wobbling 4x4 monster. YEAH!
I've also been getting well into Raffertie, who provides the remix of Boom and Pow, and makes pant-wettingly grinding breakcore / dubstep hybrid. His Vomit Riddim is just disquieting though, breaking down from womp nasty into the coughing and splattering of some poor munter losing their guts. It does this repeatedly. ooft.

Alexis K -The Death of Everything Cool (Permanent Damage)
Quite pleasant electronica / trip-hop type stuff that's due a digital release fairly soon. I was pretty dubious, as the press claimed Alexis K as "The First Lady of Dubstep", an odd praise, and one that seems highly implausible considering the existence of a certain Radio 1 DJ. However, the four tracks here all unite barking basslines, half-time rhythms and the rest with an unusual country/ western bent. Alexis' guitar lines are crisply played and pretty catchy, but do take away from the dancefloor potential of some tracks - The title track kinda feels like the final tune on a mix, rather than a DJ tool. The combination works well on Sundance at Dawn though, where a lingering High Noon atmosphere, film samples and colt gunshots replace grime's "urban jungle" pish and gangster glock pops that have become yawnsome.
In general, the production's exceptionally crisp, the style's unique, and I've played it over a few times, but I haven't found myself slavering to play it on repeat. Worth looking out for.

Mo-Seph - The Other Place / Growth and Form (Black Lantern)
Author / curator / performance poet / Apocalyptic Goblin of Doom Harlequinade continues to unleash sonic majesty upon the world through the portal of Black Lantern - this time round, he's dredged up two EPs / mini-albums from Chemical Poets collaborator Mo-seph. Both are vault-dredgers, and the breadth of styles and influences absorbed is spectacular. There's a distinct ambient and experimental bent that pervades both EPs, flitting between delicate gamelan percussion and warm synths (Martin) and squashed electronica droning (Swamp), as well as throwing in the occaisonal breaksy trip-hop number like Entropik. There's flute breaks, cello basslines, an array of synths, and percussion ranging from Roland-esque clank to live kit and foundsounds, all building delicate sound passages. As a newcomer to Mo-seph's work, it's a little difficult to know where to start - there's such a diverse range of sounds and styles which are all executed well, that it feels a little spastic to listen to. Download both, get 'em on your mp3 player and set course for the middle of nowhere... real fucking wow music.
at 6:00 pm