History Clock are an awesome record label from London specialising in re-edits of obscure funk and disco. I first came across them after one of those glorious "what the fuck is that tune?" moments early in the evening at Optimo. Where there's about five people dancing to one of the best tunes you've ever heard.

Wicked hook, gloriously disco-tastic strings and thick percussion. Totally camp as all hell. The tune was The Fitzcarraldo Variations - Black Cat (buy), which was bigged up by the usual music press, as well as being glowingly praised by the Guardian's music section. 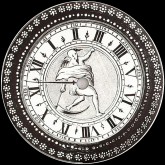 I've finally tracked down the mp3 courtesy of the blog Disco Delicious, who provide a regular stream of great disco, funk, house and the like. Well worth checking out. Download it, mix it, and rock it out.
The Fitzcarraldo Variations - Black Cat (buy)

Side note - Boomkat calls History Clock's Tokyo Takedown 12" "mid-tempo disco-funk made for middle-aged beardy types".... Could they be speaking of this man?

Thanks to Disco Delicious.
at 2:51 pm