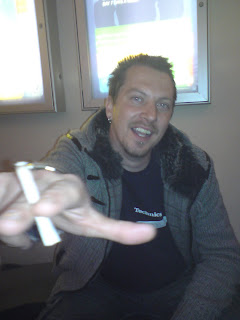 Team Little Rock think that Voltergeist is a dangerous man who should not be allowed to persuade people to casinos at stupid times in the morning, drink them under the table then argue loudly over whether Black or Red Angel was the better Hallucinator track at 7am with the volume at full. Nor should he be given a microphone.
However, long may he continue to make dubby, tripped out tech-house that conjours the cavernousness of the Scottish wilderness.
You can stream his time in the Radiomagnetic Studio From this link
We love his debut EP/ Mini album, Earthern Spirit Loops, including Bones, which gets serious rinsed and the awesome Solarium.
Voltergeist - Solarium (MRR000) (Excerpt) by Microrave Records

At the moment, we're enjoying a promo live set, which has cropped up on soundcloud and sounds bloody awesome. Hopefully, this means someone will get round to giving him some gigs and letting him blast his dub-heavy dancefloor sound through proper speakers. Coming on like the bastard child of early Deadbeat, The Black Dog and Fluxion, it's pretty kicking. Download it directly. NOW.
at 5:15 pm